Kode| Congratulations on the release of your new album! The reviews have been great, what does it feel like to finally have it out there to the world?

Nick| It feels great to be back and not only with brand new music but with my TV show, “Kingdom” as well. This year has been incredible so far and I’m excited about the reactions to my new album – I’ve worked really hard this past year to create a body of music that I’m extremely proud of.

Kode| Things have been quite silent from you and the rest of the Jonas clan for some time now. Why did you decide that now was a good time for you to release new music.

Nick| I believe that everything fell into place the way it was meant to. The timing on all of this aligned very organically – for both the album and the TV show.

Kode| This go around you worked with some amazing talents like Angel Haze, Demi Lovato & Mike Posner, what was it like working with these great artists and whom can we potentially see you collaborating with in the future?

Nick| There are so many amazing artists out there today. Some of my inspirations in this album came from both classic and modern artists such as Prince, Stevie Wonder and The Weeknd. Right now, I’m really into Soul and R&B so I’d love to work with The Weeknd or Sam Smith. 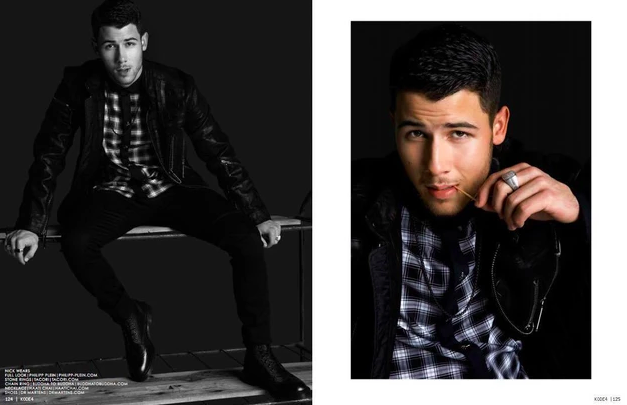 Kode| Speaking of features and collaborations, what does the future hold for the Jonas Brothers? Will there be another album or maybe a feature track on your next project?

Nick| You never know what the future holds, but right now I’m focusing on my own path and making music that feels right to me an that I’ve been personally inspired by.

Nick| The creative process was all about opening up and collaborating with new people who inspire me to do better.

Kode| With this new album you seemed to have really found your niche. It definitely has a much more mature sound and a darker R&B vibe going for it. What steered you in this direction rather than your more pop sounding roots?

Nick| I grew up listening to people like Stevie Wonder and Prince and the BeeGee’s. I’d say my Dad’s love of this music shaped who I am today as an artist.

Kode| We know you are big on interaction and feedback from your fans. What are you trying to communicate to them with your new sound, what would you like them to know about adult male Nick Jonas?

Nick| I hope they can see the changes I have gone through and the maturation of me as a solo artist. Before, I was known as a pop singer but with this album I think people are really seeing the soulful side that I’ve been influenced by. They are also seeing more of a personal connection to my music as it relates to different genres that I enjoy.

Kode| The music video for ‘Chains’ is very gripping and extremely stunning. You said that the song and video would set the tone for the next phase of your career. What did you mean by that?

Nick| A lit of people, before this album, wouldn’t have thought of me as someone who can relate to these heavier themes and topics but I think that the video helped show a new more serious direction that I’m heading in.

Kode| What does it feel like to finally truly be on your own; No brothers, No Administration, just Nick Jonas the man and artist?

Nick| It’s really exciting. I’ve been able to different things in the past, but now, I really get to explore this moment in my life, it’s this point where I can really pull from previously untapped influences, and deliver something that people never expected from me.

Kode| It’s been some time since fans have gotten to see you on tour, I know you had a sold out club tour recently, now that the album is out do you think you’ll give them an arena tour for this project?

Nick| The club tour was incredible! We visited 12 cities throughout the US and Canada and played for smaller venues, so I had the opportunity to really connect with my fans this time around. Playing in these venues, I could sense the passion coming from the audience but I’m really looking forward to getting back in the road for something a little bigger, where I can connect with even more of my fans.

Kode| Now we know that you are also an actor and are currently starring in DirecTV’s show Kingdom. You play an MMA fighter who is very reserved and private. What can you tell us about the character you are playing and what that journey has been like for you?

Nick| My character is very complex and kind of mysterious. There’s a lot of emotion and drama on the show but my character, Nate, is a bit more quiet and brooding than the other characters. At the same time he’s also this ripped and edgy fighter, so it’s been enjoyably complex balancing the two sides of him; the physical strength and the emotional solitude. I’ve had great stuff to work with during this first season, and I cannot wait to see where they’ll take me with the next two.

Kode| you have some pretty explicitly sex scenes on the show, how does your girlfriend handle that?

Nick| Luckily, she knows what it’s like to work on projects where you’re putting yourself out there to the public. It may seem like something that would make people uncomfortable, but I’m very lucky to have a girlfriend who understands.

“Right now, I’m living in this moment and loving all the great things that are coming my way.”

Nick| When you’re acting, you’re trying to be someone else in order to get into the skin of this character, in my music, it’s all about expressing myself and putting my own feeling out there. So, the two processes feel pretty different for me.

Kode| Incredible talents such as Justin Timberlake, Jennifer Lopez, and most recently Jared Leto have had very successful careers in both music and acting. Where would you like to see your acting career acting career go and what is your dream role?

Nick| I would love to continue to pop up in roles that people don’t expect for me, and to work with great directors and other actors who I can learn from and continue to grow.

Kode| You are essentially the only young male act on the airways presently, are you enjoying being the only heartthrob reaching for the ladies hearts?

Nick| I’m not sure if I’m the only one, but it’s definitely flattering to get this kind of attention. Moving forward, I think I’m going to keep my shirt on for a little while and let my music take center stage.

Kode| You and your brothers reached dizzying heights of success at a fairly young age with a fairly tame image. What do you think it was that kept you from heading into the more good kid gone bad persona like similar young artists throughout history have?

Nick| I’m very fortunate to have gone through this journey with my family beside me, and I think that really helped to keep me grounded. I was lucky enough to have supportive people surrounding me throughout my life, helping me achieve my goals.

Kode| In the scope of the current generation there is no male vocalist more successful than Justin Timberlake, are you taking any pointers or inspired in any way by his career and has he by chance offered you any advice?

Nick| Being compared to Justin is awesome – he has had an incredible career, so it’s really cool to see people react in that way.

Kode| We know you are big on family, what are the holidays like with your family?

Nick| Holidays with my family are at about downtime and just enjoying each other’s company… and obviously lots of music.

Kode| How would you like to see yourself, your music, and your career evolve over the years to come?

Nick| Right now, I’m living in this moment and loving all the great things that are coming my way. I’ve worked with some amazing people had the opportunity to explore both music and acting. In things that excite me and that I’m passionate about.

Kode| Is there anything else that you would like to leave with your fans about this new chapter in life?

Nick| First, I should say thank you so much for all the support for this record, it means so much to me. Going forward, I just hope that people continue to respond to the new paths I explore and join me for this ride.